Master, would you please talk about you: “who is Master Mauro Ria”?

It is not easy to tell about ourselves  in a few words, but I will try to be as brief as possible.

I am the elder of 3 children and I lost my father in my early age. This experience made me very soon become mature. I have been living in a village at the extreme suburb of Rome and, it in this surrounding,  I began to get near Martial Arts, being also stimulate by the exiting magnetism Bruce Lee was  able to transmit though his films at that time.

Yes, I began when I was only 13  and used to learn Jiu Jitsu.  One day, during a quarrel, after a foot ball game,I received a bad kick on the face. I understood that what I was studying did not exactly answer to my necessities.

Since that time, I began to study with real Masters with the aim to find an invincible Kung Fu, similar to the one expressed by Bruce Lee. At that time, in Italy, the real Traditional Kung Fu was not yet very diffused such as it is now a day.

When did you have the very first approach to Kun Fu?

I came to know occasionally a gentleman original from Ireland whose name was Loie Gallager (I am not sure about the spelling). That guy used to travel very much. During his moving he went  to China and Indonesia, where he had the opportunity to learn a lot about many traditional weapons. I do not believe he was a Master, but I found that he was quite good. With him, in a equipped garage, together with other guys  we began to work on the use of traditional Chinese weapons. This was my very first approach to Kung Fu.  But, Loie disappeared suddenly and later I learnt that he had died in Malesia as a mercenary.

Since that time I focalized my interests on every things inherent to Kung Fu (Shaoling, Tan tui, Qinna, Tsieu Lam, Chang Quan, Ba Ji Quan, Jet Kune Do ecc…ecc…) but my very important studies has been concentrated on Bagua Zhang and Xing Yi Quan.

Who has been your most important teacher? Please tell us something about him?

I have learnt and follow my studies  with anyone could be able to make my Kung Fu improve and, therefore, I consider  anyone who helped me do that, important  in the same manner. However, I have to mention one among the others Master Giuseppe Capriglia. It is with him that I had the opportunity to practice with a lot of Martial Art artists coming from all over the world and attained some more  experience with them. 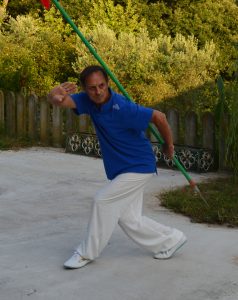 With him I have learnt  a studying method and the opened  approach to research,  leading me, in anticipation with the time, in Italy, to the fascinating world of Wushu, during the sixties. Many people, now a day,  living in a world full of technological means, are not aware how complex it was at that time to obtain material and leadership to learn a genuine traditional method of Kung Fu, except  those who had a lot of opportunity to travel.  Later on, with the improvement  of commercial and  cultural exchanges between  China and Europe,  we began to attain directly from the source with important Chinese Masters coming to Europe and, consequently, helping to reach considerable technical general improvement among people passionate of Kung Fu.

Thanks to Master Giuseppe Capriglia, through exponents accredited to United Nations, Italia-China association and Chinese Embassy, at the end of the seventies, beginning of eighties,  I discovered  to have become very fond of Bagua Zhang and Xing Yi Quan, methods which I never stopped studying and that became my life.

We really dedicated a long time on studies and researches  around these 2 wonderful methods.  We received valid help  from the more opened  mind Schools to share experience of Chinese Master sources: United States, Canadian, English.

I remember with great satisfaction about a performance given by our Wushu FAO Group, inside of Vatican’s wall. The audience was amazed about this strange “Karaté”. I think this has been the first Martial Art performance happened  in Vatican and may be the unique.

A long time passed through, but more than ever  Master Giuseppe Capriglia and I we are still going on studying and sharing our experiences with the same enthusiasm of that time.

The styles of Kong Fu we are teaching in our School are in a constant evolution and, to avoid to change the original nature of the traditional aspect of the Art, we can count on the supervision  of Master’s Liu Jing Ru’School, through Master Kong Cheng.  Another great help also comes  from Master Zhao Ming  Hua with whom we keep a good relationship.

However, I can surely assert that Master Giuseppe Capriglia has got a fundamental role regarding my forming.

During Life,  every Master’s mission should be, not only to improve day after day, but also transmit his knowledge to his students, provided that he is worthy, so that the Art should not be lost.

The transmission is not only a must, but also a great privilege without any price. Therefore during his function he should have mastered a deep knowledge  and conviction about what he his teaching, avoiding everything which could undervalue, deform, undergrad the huge treasure, that he has the prerogative to transmit.  A real Master must, before all, help the student to become a real man, of great morality, who  builds the foundation of his existence with the ethical Martial Art code “Wude”.

This is what I intended with the definition worthy students. Mastering the Art, more than improving health quality, makes become strong, both  body and  soul. Moreover, we acquire the power to be able to change the course of things for the good and for the evil.

Good men improve the social status  and the world we are living in, transmitting values which are the deepest essence of Martial Art  but are disappearing , living emptiness and aridity in this modern society.

Master, how do you see the panorama of Chinese Martial Art in Italy?

According  to my very personal idea, I can say that in Italy we have lived several seasons around Chinese Martial Art. I lived some of them as a student and others as teacher.

In  the beginning  everything was moved by the excitement transmitted by Bruce Lee films and by Kung Fu movies coming from Hong Kong. There was a lot of improvisation. However the practicing of the discipline was growing more and more. All this movement began to be canalized and organized in an more sportive aspect through the first tournaments. It was the time of “FIKTEDA” first Italian Federation (in my memory). It included Karaté, TaeKwondo e similar disciplines.

Since that time the Wushu began to be diffused and, in our country, the level of technical competence grew up notably thanks to the contribution of “FITAK” (Italian Federation of Kung Fu) which  took the place of “FIKTEDA”.

First the “FITAK” and then the “FIWUK” canalized the Wushu always more in an sportive system, from which many traditional Schools not linked to the optic of competitions  got dissociated and followed a parallel  course  oriented towards another way of Martial Art view. Others preferred to remain isolated in their own gymnasium  following to work and study with the help of their own Masters.

Today, I believe that a new dawn has come for Chinese Martial Art in Italy. We are gradually oriented beyond the sportive aspect .

Thanks also to the many initiatives promoted from the “FIWUK” a new reality his going to be materialized,  which is going to valorize even cultural aspects regarding the Chinese traditional Kung Fu, which are disappearing even in China.

Master what do you think about “FIWUK”

I believe that “FIWUK”, through its fresh, important and solid project, with the tendency to valorize always together, the sportive, traditional and cultural aspects of wushu and Kung Fu, is getting to approach again a lot of School,  who are giving availability of their personal knowledge, through exchanges of patrimonial technical knowledge.

From this, all the sector is going to take a good advantage of growth and development.

I am convinced that we can do great things, which will help  improving the technical value and competences of every one .

For this reason I am giving my disposability to contribute humbly with my own experience.